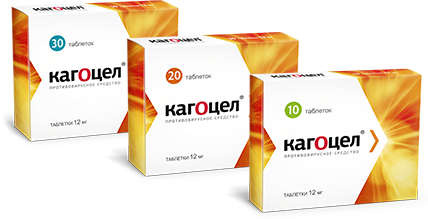 №1 FOR PREVENTION AND TREATMENT OF SARS AND INFLUENZA BY VOTING RESULTS OF RUSSIAN DOCTORS WITHIN THE FRAMEWORK OF THE PRIZE «RUSSIAN PHARMA AWARDS 2020».

* ON THE VERSION OF RUSSIAN PHARMA AWARDS 2020, IN THE NOMINATION "MOST OFTEN PRESCRIBED DRUG FOR THE TREATMENT OF SARS AND INFLUENZA."

The project "When your girlfriend has fallen ill" received a bronze award in the PR category at the White Square, the largest creative arts festival in Central and Eastern Europe.

On March 18-24, the Japanese city of Saitama will host the ISU World Figure Skating Championships® 2019.

Detail
Kagocel Named Choice of the Year in Belarus

On December 13, 2018, the 17th award ceremony of the Choice of the Year contest was held in Minsk.

Detail
DSM Group: Kagocel Is No.1 Among Domestic Brands

On December 18, the results of the National Pharmaceutical Rating 2018 were summed up, which, in fact, is a reflection of the real picture of domestic pharmacology.

On November 29, 2018, at the 7th Russian Pharma Awards 2018 ceremony, Kagocel was again selected as the "Most Often Prescribed Drug for the Treatment of SARS and Influenza".

On November 14 in Moscow, the most popular goods of mass demand were awarded the "Product of the Year" award for the 20th time.

The most powerful wizard of the country goes off on his "Father Frost and NTV journey" again.

Detail
Kagocel Will Not Let Your Loved One Stay Sick

If your loved one is sick, you would long to render help in every possible way.

One of the largest sports competitions will be held in Minsk on January 21-27.

Detail
Meet the 20 Tablet Package for the Kagocel Antiviral Drug!

The NEARMEDIC company has officially announced the release of the drug Kagocel in a package containing 20 tablets.

Kagocel is the leader in the volume of sales in real terms in the group of antiviral drugs for 2017 in Russia.

From January 21 to January 27, 2019, the city of Minsk will be hosting one of the largest sporting events of this winter – the ISU European Figure Skating Championships® 2019.

The antiviral drug Kagocel sticks to its tradition of supporting sporting events of a global scale. No. 1 non-prescription drug in Russia, as rated by the National Pharmaceutical Rating 2017, has already acted as a sponsor at the latest ISU European Figure Skating Championships®, where our figure skaters once again proved to be among the strongest athletes in Europe, having won in the medal standings. Now, Kagocel decides to support Russian athletes in their next major competition, the ISU World Figure Skating Championships®  2018.

On November 22, the Izvestia Hall hosted the Goods of the Year 2017 prize giving ceremony. This prize is awarded every year to the most popular products in various categories.

On November 23, the results of the practicing doctors’ voting for the best in the pharma market in 2017 were made known.

Winter sports are known for their spectacularity. Traditionally, during the snow season we closely watch our hockey players and figure skaters so that we don’t miss triumphantly scored goals, triple toe loops and fantastic supports.