An important current epidemiological phenomenon is the simultaneous circulation of different types and strains of viruses, including influenza viruses, as well as the presence of mixed infections — influenza and other acute respiratory viral infections in one patient. Adenovirus infections occupy a leading position in the general structure of acute respiratory viral infections, especially in periods when influenza rarely occurs. Bearing in mind the particular clinical course of adenovirus infection, the principal challenge of antiviral therapy, in addition to relieving the manifestations at the height of the disease, is to suppress adenovirus persistence and reduce the frequency of development of late pneumonias and a protracted and recurrent clinical course. A retrospective analysis of case histories where interferon inducers and interferons were used to treat adenoviral diseases in young people established that Kagocel, an inducer of the «late» interferons, significantly decreased the incidence of pneumonia and a protracted and recurrent course compared with the baseline (pathogenetic) therapy.

Adenovirus infection accounts for a significant share in the etiological structure of ARVI in young people in organized groups. 1, 2, 3 The course of acute respiratory diseases of adenoviral etiology is characterized by the frequent development of purulent tonsillitis, a protracted and recurrent course, and adenovirus-associated pneumonia which can be fatal. 4, 5 Therefore, the search for effective therapy and prevention of adenovirus infections is an important objective of military medicine.

Direct and indirect-acting antiviral agents are currently used to treat acute respiratory diseases, including adenoviral diseases. 6, 7, 8 We have previously shown that direct-acting antiviral drugs (ribavirin and umifenovir) significantly reduce the duration of the pronounced clinical manifestations of adenoviral disease. 9 However, these drugs have not demonstrated a significant effect on the incidence of pneumonia or a protracted and recurrent course. This is probably due to the predominant effect of etiotropic agents on the adenovirus replication stage which is accompanied by pronounced clinical manifestations. A protracted and recurrent course of adenovirus infection, as well as late pneumonias, are caused by the development of the integrative phase and a prolonged persistence of adenoviruses in the lymphoid tissue. It should be expected that the use of indirect-acting (mainly immunotropic) antiviral drugs (interferon and interferon inducers) will reduce the incidence of complications of ARVI, including those of adenoviral etiology. 10

Study aim: to assess the clinical efficacy of antiviral drugs with an indirect (immunomodulating) action in the treatment of adenoviral diseases in young people.

The criteria for the clinical, as well as therapeutic and preventive efficacy of the adenoviral therapy were as follows: the average duration of the intoxication syndrome and fever; the mean day on which the maximum fever was recorded; the average duration of the respiratory syndromes and cough, non-respiratory syndromes (conjunctivitis and tonsillitis), as well as a decrease in the frequency of development of a protracted, recurrent course of the disease and penumonia complications.

The compared groups were comparable in the time of initiation of therapy, sex, age, as well as the severity of the intoxication syndrome and febrile response on the first day of antiviral therapy. The number of observed cases of adenoviral disease in each comparison group was representative (more than 30). Thus, a mathematical statistical analysis was conducted and parametric and nonparametric statistical methods were applied in order to identify differences.

The «early» interferon inducers (meglumine acridonacetate and tilorone) did not significantly affect the duration of general infectious syndromes (intoxication, fever and total length of the febrile response), and respiratory syndromes (rhinitis, pharyngitis, laryngitis, tracheitis, bronchitis), cough and non-respiratory syndromes (acute conjunctivitis and acute tonsillitis). The dynamics of individual symptoms that demonstrated a significant difference (p <0.05) from the background therapy is presented in Fig. 1.

The use of interferon demonstrated a significant difference from the background therapy only in the duration of fever (1.6 ± 0.88 days vs. 3.4 ± 1.98 days, p <0.05), while there was no difference between the time of development of the maximum temperature and the total length of febrile response between the groups.

Acute respiratory viral infections, including adenoviral diseases, with uncomplicated purulent tonsillitis, sinusitis and pneumonia, are known to be characterized by spontaneous recovery.

In connection with this, and the previously identified features of the course of clinical adenovirus infection, the most significant indicators of the clinical efficacy of antiviral drugs in the treatment of patients with ARVI of adenoviral etiology are a reduction in the incidence of complications and a protracted and recurrent course of the disease.

To assess the therapeutic and preventive efficacy of interferons and IFN inducers compared to the background therapy according to the proposed criteria, the frequency of complications (pneumonia, purulent sinusitis, tubo-otitis, recurrence of HSV infection), and a protracted and recurrent course were calculated and statistically compared using Pearson’s χ2 test. 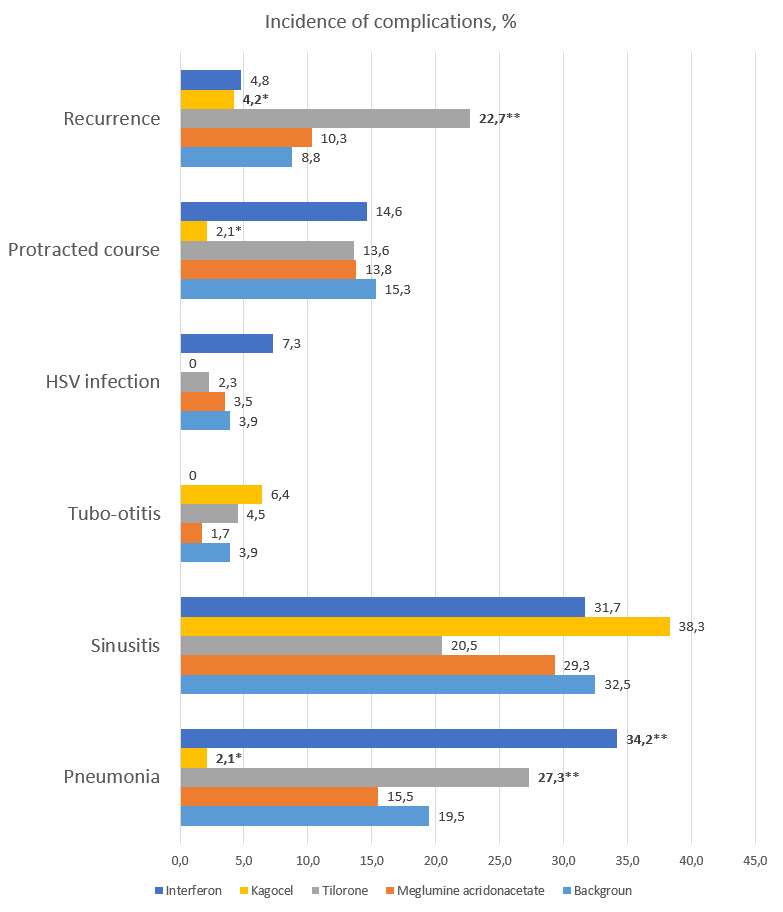 A comparative statistical analysis of the frequency of development of a complicated, protracted and recurrent course demonstrated that oral administration of meglumine acridonacetate, tilorone, and interferon inhalations did not significantly decrease the incidence of complications or a protracted and recurrent course. Moreover, in comparison with the background therapy, the use of tilorones significantly raised the incidence of pneumonia and a recurrent course, while interferons only increased pneumonia. In the first case, this may be due to the fact that tilorones stimulate substantial production of early alphainterferon, in the second case — to the fact that interferon was administered by inhalation and with deep forced breaths of patients. The latter probably led to a downward spread of adenoviruses to the lower respiratory tract and lungs.

Taking into account the data of previously conducted studies, direct-acting antiviral agents (ribavirin and umifenovir) remain the drugs of choice for the relief of the clinical syndromes during the phase of pronounced clinical manifestations of medium and severe adenovirus diseases as part of complex therapy. 9 Based on the results of the conducted study, the drugs of choice to prevent the development of pneumonia, and a protracted and recurrent course of adenoviral disease are polyphenol derivatives, e.g. Kagocel.

It should be expected that combined antiviral therapy with a simultaneous use of direct (ribavirin or umifenovir) and indirect (Kagocel) acting drugs will have a synergistic therapeutic and preventive effect. 10 For instance, combined therapy of influenza A (H1N1) pdm09 virus has shown that concurrent use of direct-acting antiviral agents (oseltamivir and umifenovir) and Kagocel, an interferon inducer that stimulates the patient’s innate immunity, is more effective than monotherapy with a direct-acting antiviral drug, which was expressed in a more rapid relief of the disease symptoms and a reduction in the incidence of complications. 14 Meanwhile, the inclusion of an indirect-acting antiviral agent (including a late interferon inducer) in the complex therapy of ARVI and influenza is not limited to viral etiology. This is important in the current epidemic situation with a simultaneous circulation of different types and strains of viruses, including influenza viruses, as well as mixed infections with influenza and other respiratory viruses in one patient. Numerous studies of Kagocel have confirmed its efficacy, regardless of the etiology of the identified respiratory pathogen. 15 Such a positive effect of Kagocel on these parameters may be due to the stimulation of production of interferon (probably mainly gamma) by polyphenol derivatives, which led to an accelerated elimination of virus-infected epithelial and lymphoid cells in most patients.

As the conducted studies have demonstrated, the inducers of «early» interferons (meglumine acridonacetate and tilorone) did not significantly affect the duration of the general infectious, respiratory and non-respiratory syndromes in the treatment of adenovirus infection. Administration of interferon led to a significant difference with the background therapy only in the duration of fever. The use of the «late» interferon inducer Kagocel in the treatment of patients with adenoviral diseases significantly reduced the duration of rhinitis (by 3.4 days, p <0.05) and cough (by 4.7 days, p <0.05) compared with the baseline therapy, and, unlike the «early» inducers, significantly decreased the incidence of pneumonia by 9.28 times (2.1% vs 19.5%, p <0.05), a protracted course by 7.28 times (2.1% against 15.3%, p <0.05) and a recurrent course by 2.1 times (4.2% vs. 8.8%, p <0.05). The drug combined well with the conducted symptomatic therapy and demonstrated a high safety profile. The obtained results unambiguously confirm the clinical efficacy of Kagocel in the treatment of acute respiratory viral infections and are in full agreement with the published studies of other authors. 14, 15, 16